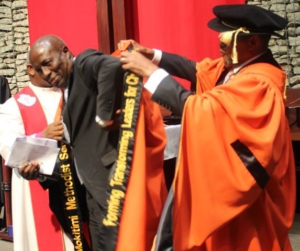 Justice Moseneke was inducted at the sixth annual Peter Storey Lecture, which he immediately delivered, on 12 May. He also officiated at the graduation the following morning.

Introducing Justice Moseneke before his inauguration, SMMS President, Prof Simangaliso Kumalo, described him as a person from humble beginnings who has acquitted himself with distinction as is evident not only in the long trail of significant, selfless and unobtrusive contributions he has made to the development and transformation of our land, our young democracy and its people, but also in the tremendous achievements of his eminent career.

Prof Kumalo’s views resonated with those of SMMS Governing Council Chairperson, Prof Gordon Zide who described Justice Moseneke as “a highly respected and experienced leader both in the secular sphere and within the Methodist Church of Southern Africa in which he is a member.”

“He also has experience as Chancellor of the University of the Witwatersrand. Now that he is retired, he may have more time to help with profiling and positioning the institution. The Methodist people will benefit from his vast knowledge and experience,” Prof Zide said.